Learning About William—
and a Little Latin

In looking for any published reminiscences by the children of Georgia pioneer Job Tison, I realized the more likely choice for a productive search might be to first follow his sons. Why? Job's death in 1824 signaled a time when women were nigh invisible when it came to published material. Thus, after examining the possibilities yesterday linked to Job's oldest son Aaron, we'll bypass his daughters Sidnah, Melinda, and Susan, to arrive at the next oldest son, William.

As the Tison family expanded over the next two generations, the name William seemed to become a popular choice, so when examining newspaper entries for William Tison, I needed to be careful to select the right initial: H. While I have no idea yet what the "H" signifies, that is the letter affixed to the name of Job Tison's second son.

I had stumbled upon some remarks, in online searches, which seemed to indicate that William Tison had, at one point, served in the Georgia General Assembly, so I was keen to explore what could be found on the man. Not much surfaced, other than the usual genealogical resources such as census and marriage records—until it came to the months following the year of his death.

Before jumping to that point, though, let's get a brief overview of what occurred during William H. Tison's lifespan. First, we must realize that when mentioned in his father's will, William was generally clustered by his father with three siblings, "my four youngest children." At the time of his father's passing, William was about eleven years of age.

Only from his grand-daughter Frances' D.A.R. membership was I able to learn that William had been married twice. On that record, William's first wife was listed as Mary Ellis Hardee, who died in 1847, possibly following the birth of a son.

Between the date of William's wife's death and his second marriage, it is hard to trace William's location. One possible entry in the 1850 census is for a traveling merchant, enumerated in the household of one Silas Niblack in Columbia County, Florida. Despite no mention of his children, this is not as far-fetched a possibility as it may seem, keeping in mind that the recently-formed Columbia County was carved from the northern portion of Alachua County, the same location where William's older brother Aaron had settled, twenty years prior.

By 1860, William was back in his native Georgia, where the census showed him living in Savannah with his second wife, the former Mary Scotia Fenton, plus fourteen year old Fannie and twelve year old Mitchell, William's two children from his earlier marriage. An unexpected bonus from this record was the enumerator's overzealous listing of not only each person's state of birth, but detailing the specific location. From this, we glean the fact that Fannie was actually born in Hamilton County, Florida, giving credence to the discovery of William's possible location in Columbia County, adjacent and to the southwest of Hamilton County, in the previous census.

It is likely that William stayed in Savannah for the remainder of his life. He was buried alongside his second wife only a year after her death in 1876. Discovering the location of their final resting place—a beautiful landmark cemetery known as Bonaventure Cemetery—I realized my research trails had led me to pass this way before in chasing Tison descendants, which I explained nearly two years ago in a four part series exploring the Tison connection to the family behind Savannah's Mercer House.

While not much could be found—at least not yet—about William H. Tison during his lifetime, there were several mentions of his name in Savannah subsequent to his passing. One, buried in the legal notices in The Morning News on April 23, 1888, announcing, "Whereas, Brantley A. Denmark has applied to Court of Ordinary for Letters of Administration d. b. n. on the estate of William H. Tison, deceased" got me scurrying to discover what "d. b. n." might mean.

Thankfully, a second insertion in the May 10, 1888, edition gave me more of a handle on resolving the mystery: "Brantley A. Denmark qualified as administrator de bonis non of the estate of William H. Tison."

Quick, racing from search engine Google to the genealogist's legal friend, blogger Judy Russell's Legal Genealogist, I ran for help—and help I received, from a post she wrote back in August 31, 2012, spelling out not only the meaning of "de bonis non," but of all the various terms we can encounter while researching our ancestors' administrators or executors. The straightforward explanation: "If the administrator dies and part of the estate still needs to be administered," that is the term used to designate the court-appointed replacement.

Of course, that brings up questions. Like, what happened to the original administrator? And, why hadn't William appointed an executor? Did he not have a will before his death at age sixty five?

Those, however, are questions for another research project. Our goal here, in trying to wrap up January's family history quest, was to see whether any of Job Tison's children might have reminisced about the good ol' days when their father was one of the early settlers in Glynn County, Georgia. Apparently, Job's son William was not only tight lipped about the history of his forebears, but about his own life, as well. 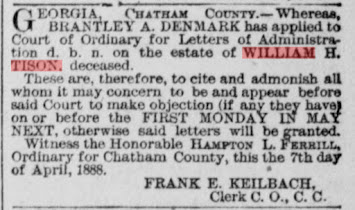 Above: Insertion in the legal notices in The Morning News, Savannah, Georgia, on April 23, 1888; image courtesy U.S. Library of Congress Chronicling America project.

© Copyright 2011 – 2022 by Jacqi Stevens at 2:49:00 AM
Email ThisBlogThis!Share to TwitterShare to FacebookShare to Pinterest
Labels: Georgia, Online Resources, Tyson, Wills and Probate