"The Ranch on Vincent Street"

Nothing can make our ancestors' stories come to life quite like being able to walk on the actual land where they once lived. That is the sort of magic which will fuel a once-in-a-lifetime trip across continents and oceans to experience for ourselves just the slightest slice of life for our forebears.

Though I can't make the trip just now to the property in southern California where Maude Woodworth grew up—though it certainly is a closer journey than what our family planned in 2014 for our pursuit of my father-in-law's Irish roots—there is a next-best option available. We can look up the Woodworth property on plat maps of the county.

That, at least, was the idea I was pursuing when I read in Maude's father's obituary that he had settled with his parents in the region near Covina in 1886. In that 1928 obituary, the Covina Argus had called him "a pioneer of the Azusa valley" and mentioned that the family had farmed "the ranch on Vincent street" which sometime before William's passing had become property of a Reynolds family.

It just so happens that the United States Library of Congress has an extensive map collection which includes some plat maps for locations across the country. Since the Woodworths had settled in Los Angeles County, I felt chances were good that the Library of Congress would include such a map in their collection.

Rather than search directly through the Library of Congress website, I used Google to direct me to the closest possibilities. I found three: one map drawn in 1877, another in 1888, and a third in 1898.

I already knew from William Woodworth's obituary that the 1877 map would be of no use in answering my question, so I tried the 1888 map. Though there were surnames inserted on many of the properties, others were identified only by numbers or letters. Bottom line for me: no sign of any Woodworth property. Not even any familiar names on the few labeled streets.

Trying the 1898 map didn't yield any better results. By then, the map revealed just how much development was occurring in the area as even back then, the push to move to the "suburbs" was gaining headway.

That's when it occurred to me that I had, years ago, found an unlabeled photograph in the collection of Bill Bean, Maude's brother-in-law. It was one of many pictures he had of men working in rugged California terrain, which for some reason I long ago got into my head might have been the Woodworths working their land in the San Gabriel mountains of southern California. Of course, I have no basis for that assumption—Bill Bean wasn't even a relative of Maude's family—but that is just an example of how things get stuck in one's head. I kept looking on the plat maps for property closer to the hills, when Covina itself, their stated residence, was not as close to the mountains as are some other cities in Los Angeles County.

With that, it became obvious that, though I drive through the area with regularity on my visits down south, I can't let assumptions drive my research. It was time to stop pursuing the trail and take a research break to bone up on some local history of the area which eventually became the city of Covina. 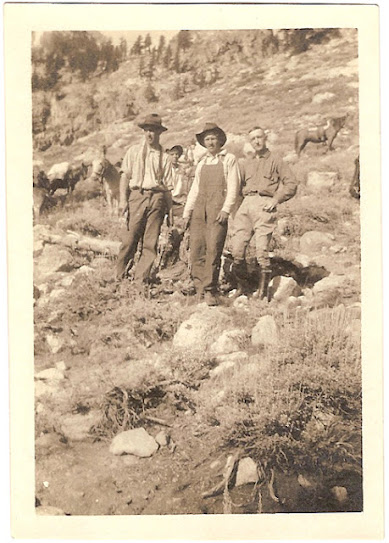 Photograph above: undated picture of three unidentified men in work clothes (with a fourth seated behind them) stopping on a hillside in California. Though this photo was from the collection of Maude Woodworth Bean's brother-in-law William Bean, I often wondered whether this represented members of the Woodworth family.