Welcome to a New Year!
Now, What are you Going to Do About It?

You realize, don't you, that a calendar is tangible evidence of a mental construct. That's all it is. And boy, do we need a new "construct" to wrap our heads around. I can safely say I have plenty of company when I hope the best for a better year to come.

The turning of a page on a calendar can bring all sorts of hope, if we choose to let it. That flip of the calendar page also allows us to plan to make things happen. For the past six days—halfway through the twelve days of Christmas—I've been outlining research plans for finding the most stubbornly hidden of my family's ancestors. I've already outlined three key individuals I'd like to find more about in my mother's family, and then three for my mother-in-law's family.

Now it's my father-in-law's turn, beginning with Ancestor #7 of my Twelve Most Wanted for 2021. This is where the Irish side of the family gets its moment in the sun, and just as I did last year, I want to return to wrestle with some Kelly ancestors.

It seems impossible to research Irish ancestry without running into someone with the surname Kelly, and in my father-in-law's case, doubly so. Last year, I struggled to push through the brick wall on my father-in-law's great-grandfather, John T. Kelly from County Kerry, along with his wife Johanna Falvey. While I found many details on their collateral lines, I'd have to admit that goal did not permit me to emerge from the month victorious in my research, despite many DNA clues.

This year, I'll tackle a different Kelly line. Yes, that is correct: my father-in-law had two different Kelly families in his ancestry, of which each line settled in the same state—Indiana—though on different ends of the state. For this year's Kelly exploration, we'll take a look at the family of a woman named Catherine Kelly—a woman who died young, owing to complications of childbirth.

Though her early death was tragic, she left behind not only her three young sons, but also her mother and siblings, each of which may provide, as collaterals, information which could lead me back another generation, or at least connect me with information on where, exactly, this Kelly family originated in Ireland.

Though this research plan will be a challenge, just like the way we look at a new year, I can choose to be optimistic about the possibilities, or let myself get dragged down with a negative attitude. It is, after all, sometimes quite difficult to connect the immigrant pieces in America with their roots in Ireland. But for those who let that attitude dissuade them from even trying, of course there won't be a research victory. I'll choose instead, for this year, to stand on that more positive attitude and keep trying for the win. 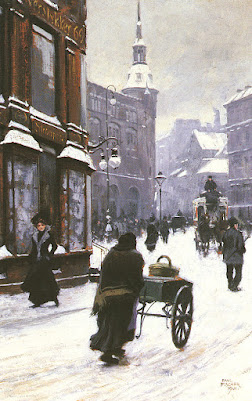 Above: A Street Scene in Winter, Copenhagen, 1901 oil on canvas by Danish artist Paul Gustav Fischer (1860-1934); courtesy Wikipedia; in the public domain.