How Close is Close Enough?


I guess you can call me the family snoop—at least, when it comes to other people's families. If there's a document, a newspaper report, or any record written on paper or even in stone, I'll always take a look at it. I look especially for any details that seem extraordinary or unusually out of place. For such details, there is always a back story.

Sometimes, I can't find that back story, but that doesn't mean I don't try. Take, for instance, my discovery years ago that my husband's unfortunate great-grandmother, Catherine Kelly Stevens, was not buried in the family plot of her husband, John Kelly Stevens, but back in the plot of her father's family. She was so young when she died, and the circumstances so tragic, that it is understandable, in retrospect, to discover that she had been buried in the Kelly family plot. What was a young husband to do?

Then, too, after all these years, the headstone is difficult to read—possibly yet again a factor of the suddenness of the death and the financial position of the bereft husband back in 1884. All combined, what later became telltale signs to help me connect Catherine with her parents and siblings, had for years stumped those who posted the details in online resources. Some volunteers had even missed the fact that her headstone actually had the name Stevens on it at all, and had filed her under her maiden name, Catherine Kelly.

It took a lot of digging around to discover the family plot in which Catherine Kelly Stevens was buried was actually co-owned by two men, neither of whom was her widowed husband. One, of course, was her father, John Kelly. The other was a man by the name of Timothy Kelly.

Now, I know how prevalent a surname like Kelly has always been in Irish circles, but it was tempting to think that perhaps this Timothy Kelly could have been a relative. After all, John Kelly named his firstborn son Timothy, a solid hint of his own father's name. And this other Timothy was of an age to have been the much-younger child whom a father might finally call after his own name.

And yet, try as I might, I could not find a connection to verify that theory. The signs of possibilities were taunting me at every turn—both Timothy Kelly's children and John Kelly's had the same names in nearly the same sequence—but I could not unearth any documents to connect the families.

I literally went through the exercise of building a family tree for Timothy, complete with ongoing collaboration with one of his modern-day descendants, without any success. Other than the choice to forge a business connection to purchase a family burial plot together, it seemed there was no connection between the two Kelly families, other than the fact that they lived around the block from each other in Fort Wayne, Indiana.

Years have passed since I attempted to solve that family history riddle. I've long since moved on from that research question. Yet, it seems I'm destined to return to wrestle with it again. Now, reaching back one generation beyond the young deceased mother Catherine Kelly Stevens, I'm working on a puzzle having to do with Catherine's own mother, Johanna Falvey Kelly. As unusual as the Falvey name may seem to be in the United States, it apparently was more widespread in Johanna's native County Kerry, Ireland. What would my chances be to assume that any other Falvey family who showed up in Fort Wayne might be related to Johanna?

I took up that research challenge this week—after all, what do I have to lose, not finding any other clues so far? I had long known that there was a man by that surname living in Fort Wayne during the same years as Johanna. He happened to be in the same line of work as John Kelly Stevens, Johanna's son-in-law. And he apparently came from County Kerry.

However, what are the chances that one other person in town—given a town size of 26,880 in 1880—would be related, just because he claimed the same surname? That's a mighty slim chance.

And yet, it wasn't so slim a chance that I wouldn't consider testing out the hunch with another family tree diagram. Up went the new private, unsearchable family tree on Ancestry.com, this time for a man by the name of Daniel Falvey—or Falvy, as his name later turned out to be spelled. I searched newspaper collections for every mention of either "Falvey" or "Falvy" in the Fort Wayne newspapers. I noted his entry in every census record during his Fort Wayne residency. And I kept looking around, remembering the F.A.N. Club concept.

It was the entry in the 1880 census that slapped me in the face. Funny how I hadn't noticed it before, when I was so focused on researching that other Kelly family. Guess who turned out to be next door neighbors? 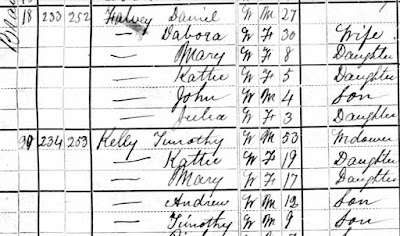 Yep. That same Timothy Kelly who has had me stumped over the years turns out to be neighbors with the Daniel Falvey who has me wondering about connections with Johanna Falvey. Could they be related? Closely? That's enough bait to lure me down yet another research rabbit trail.


Above: Image from the 1880 U.S. Census for Fort Wayne, Indiana, showing the neighboring households of Daniel Falvey and Timothy Kelly; image courtesy Ancestry.com.
© Copyright 2011 – 2021 by Jacqi Stevens at 2:48:00 AM