Isle of the Dead


Both mythology and the arts are rife with fascination over the idea of an isle or island of the dead. The concept may have originated with Celtic mythology, but has been a motif echoed in stories passed down in many European ethnicities.

Thus, it is no surprise to learn of the many times the concept has been borrowed in the arts, even in modern times. Swiss artist Arnold Böcklin created a series of paintings which eventually became known by that very title, "Isle of the Dead," beginning with a somber first version in 1880, now held at the Kunstmuseum Basel in Switzerland. From that first painting, the idea evolved with the input of a patron, who requested a copy with some significant additions, resulting in the second version. A third version, though much brighter in aspect, was eventually obtained, infamously, by one Adolf Hitler. A fourth version, created by commission, ended up hanging at a subsidiary of the Berliner Bank. All that remains of that version—destroyed by a World War II bombing attack—is a previously-snapped black and white photograph.

It was that photograph which, while on display in Paris in 1907, became the inspiration for Russian composer Sergei Rachmaninoff's symphonic poem by the same name, Isle of the Dead. The black and white of the photographic treatment evoked an even more somber mood for the composer, who later noted, upon discovery of the original oil painting, that "If I had seen first the original, I, probably, would have not written my Isle of the Dead."

There were, as it turns out, various islands which some have assumed served as the inspiration for Böcklin's creation. Some speculate that the model was a Greek island near Corfu, or the Island of Saint George in Montenegro.

There have been other islands which have actually been given that name, Isle of the Dead. Most of them have a history to go along with the dreary moniker. The Isle of the Dead, off the coast of Tasmania, was the destination for those who died in the prison camps during Great Britain's Australian convict era. Though some early eyewitnesses have romanticized the location, describing it as "picturesquely sorrowful...soothing in its melancholy," there is no escaping the brutality of its reality. Of the estimated thousand graves there, only those of prison staff or military personnel had been marked; the rest of those interred were granted insignificance by those who withheld their identity.

Likewise, in France, a set of twin island served through history, before their use for military purposes, as a quarantine island for lepers and a cemetery for the island's burials. The cemetery island was appropriately dubbed Île des Morts—Isle of the Dead.

That same combination of uses—to confine prisoners, to isolate the morbidly ill and, eventually, bury them—was a pattern in yet another island of the dead. This one, however, was not worlds away from me, but one which, within my own lifetime, I had driven past many times, yet not even knowing of its existence or purpose. You see, New York City—not far from my childhood home—has its own "Isle of the Dead." I wouldn't have known that, though, if it hadn't been for my search for a missing cousin. The path to finding Eloise Marie Lyon led me to this place of the forgotten dead, nearly at my own back door. 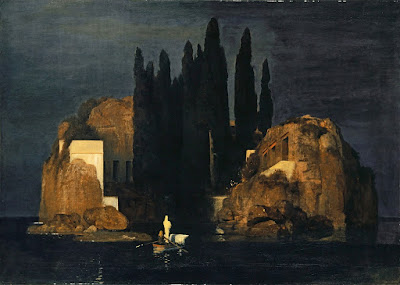 Above: "Isle of the Dead," 1880 oil on canvas by Swiss artist Arnold Böcklin; courtesy Wikipedia; in the public domain.