Whether it was on the occasion of Penrose's travels across the ocean to visit his homeland or for a different reason, in July, 1936, the Hawkes and Reid families decided to host a tea party at Bride Park. Too late to capture the full group at the close of the event, one of the hosts thought to gather the remaining guests together for a group photograph on the lawn. Thankfully, Alice Hawkes Reid had the foresight to label the names of those present for the impromptu portrait, thus giving us one more significant listing from that mystery photo album to help guide our research.

Whether this additional page will advise us in our quest to determine just who the photo album was sent to as a pictorial greeting that next Christmas, I'm not sure. But for now, let's take a look at some of the friends and family of Harry and Alice as we close out this week's research attempts.

The photo was labeled—in Alice Reid's handwriting, as we've now learned—"A little tea-party at Bride Park when Penrose was home - July 1936." Along the right side of the photograph, Alice provided the names of all included in the photo, by the three rows of their seating arrangement. 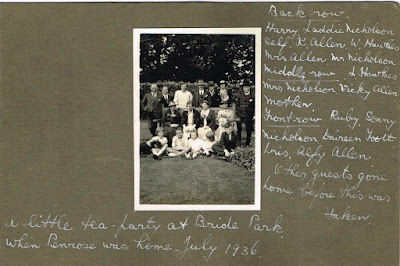 
One thing that stands out right away on this list is the appearance of two people with the surname Hawkes. Unfortunately, only initials were provided for first names: W. Hawkes and L. Hawkes. Perhaps, because the album was intended to be received by a family member—or at least someone familiar with those in the extended family—Alice felt no need to spell out their given names. On the other hand, if the album were intended for family members, wouldn't she have labeled the two other Hawkes family members by terms of their relationship, along with a first name—uncle William, for instance?

Almost as an afterthought, Alice added, "Other guests gone home before this was taken." Too bad. It would have been quite informative, for our purposes, to learn who else might have been included in the guest list. 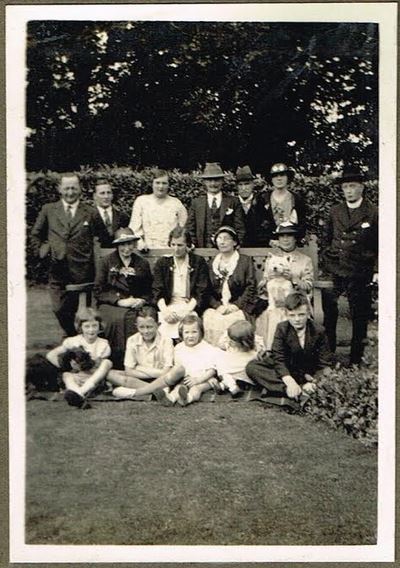 © Copyright 2011 – 2022 by Jacqi Stevens at 2:55:00 AM
Email ThisBlogThis!Share to TwitterShare to FacebookShare to Pinterest
Labels: County Cork, Ephemera, Ireland