There's not a single proud parent who wouldn't feature his or her children's pictures prominently in a collection of family photos. So, when considering the mystery album I found in a California antique shop—clearly labeled, along with Christmas wishes, from Harry and Alice—well, I couldn't help but think that the young girls who showed up in several photographs would be the daughters of this same Harry and Alice. Wouldn't you?

The girls get introduced to us, right on the first page of the "Seasons Greetings" album. 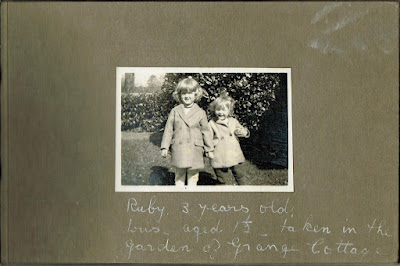 There they are—albeit younger than they were at the date of the album in 1936. I am wondering if this would be a hint: that the recipient of this album gift hadn't seen the girls for a few years, and was being reminded, first, of what the two looked like in their younger years.

I say "first" because right after that, we are shown a photo of what Ruby and Iris looked like, closer to the date the album was given as a Christmas gift. 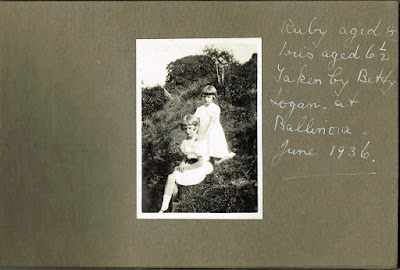 By 1936, Ruby and Iris had indeed grown. And, with the generous hint of a date to orient us to their ages, this places Ruby's date of birth sometime in 1928 and Iris' birth likely in the winter between 1929 and 1930.

Another gift we glean from these two comments: identification of locations. Admittedly, Grange Cottage could be anywhere. Grange is a name accompanying many farming-oriented communities and may be too generic to be of assistance as we attempt to identify this family and their relatives and friends in these photographs. Names incorporating the word grange can be found right here in the Central Valley of California, where I found this album. That same word, grange, is liberally sprinkled throughout the midwest, as well.

However, despite the generic quality of a label like "Grange Cottage," the second photo gives us a bit more assistance. There aren't too many locations sporting a place name like Ballinora. To get right down to it, there is only one such place I could find, even considering the online search power of websites like Google Maps. That place is in County Cork, Ireland.

Whoever Ruby and Iris were, they were either on a family vacation to the south of Ireland in 1936, or that was at least close to the place they called home. 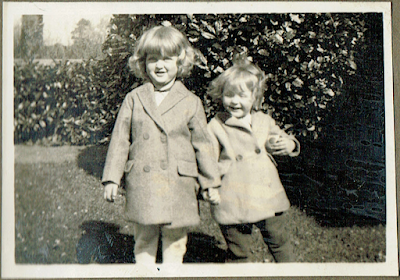