Behind all the patter here on A Family Tapestry this past week, I've been working on my mother-in-law's lines. You may recall that's the family that made the move to what eventually became Perry County, Ohio, sometime after they staked their claim to territory there.

Though the immediate Flowers, Gordon, Snider and Metzger lines of our family seemed to stay put in Perry County for generations, that wasn't the case with the entire extended family.

In the case of the Sniders, it was a story of the northerners heading further north.

Fortunately, these families tended to move in groups and settle in the same community. Not only that, but when they decided to pick up and move yet another time, the whole bunch of them made the move as a community. Again.

That made for some easy tracking—at least on my part. Perhaps they all decided to scout out better farm land, settled on an area where the extended family could all buy a sizeable portion, and plotted their move that way. For the genealogist, that simply meant when the family disappeared from Perry County, Ohio, they showed up in Winneshiek County, Iowa. And when they were through with Iowa, they picked up and moved on to Fillmore County, Minnesota.

Right now, I'm following a genealogical paper trail through various counties in Minnesota. Personally, having never been there in my life—well, once, when our Christmas flight home from Ohio was cancelled due to a snow storm and we were re-routed through, of all places to avoid in the snow, Minneapolis—I've had to depend on maps to let me know about all the places these people were tromping through.

Using maps in new genealogical territory is a no-brainer. How else could you get a sense of exactly where your ancestors were moving? Once the Snider descendants made their move from Iowa to Minnesota, it seemed they kept zooming from one county to another—until I looked on the map and saw each move was actually quite incremental. Even the move from Iowa to Minnesota was merely a hop across the county line.

Life in Iowa and Minnesota must have treated these people well, for as all good Catholics were supposed to do, they took to heart that Biblical injunction to "be fruitful and multiply." However, unlike past generations, it seemed many iterations of the Snider line, there in Iowa and Minnesota, lived to see all their children survive to adulthood.

Yet, there were some other throwbacks to prior generations in their tendency to intermarry. I saw several Snider marriages to people from a Gossman surname—then a couple generations later, a Gossman descendant might, again, end up marrying a Snider. I can't wait to see how this cousin amplification will hit the DNA test analysis process.

Meanwhile, as my mother-in-law's extended family headed further and further north, my own maternal line began the long trek southward after the Revolutionary War, moving first from Virginia to South Carolina and Georgia, then to Alabama and Mississippi, and eventually to Texas—and some even to New Mexico—the southerners heading even further south.

Is it just techniques of farming particular to certain weather patterns that inspires people to seek out similar terrain and climate? I can understand snowbirds of our current era ditching the rigors of winter in Minnesota for some fun in the sun in Arizona's January—but then, that doesn't involve the hard work of farming. But I also didn't see any Nebraskan farmers forsaking their annual livelihood for easier plowing, planting and harvesting in, say, Louisiana.

Once again, I suspect that pursuing the story of our family history will lead to revelations along the lines of the hazards of daily living, 1800s style and even in pre-war 1900s. Learning our family history is so much more than just entering names, dates and places on the pedigree chart's blank lines. It becomes a whirlwind tour of the minutiae of daily living—the stuff of everyday life that we all take for granted because everyone knows it, until a new era dawns and it suddenly becomes forgotten. 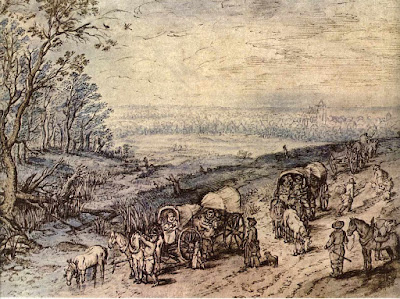 Above: "Country Road in Front of a Wood," by Flemish painter Jan Brueghel the Elder (1568-1625); courtesy Wikipedia; in the public domain.
© Copyright 2011 – 2022 by Jacqi Stevens at 2:44:00 AM
Email ThisBlogThis!Share to TwitterShare to FacebookShare to Pinterest
Labels: Maps, On the Move, Perry County OH, Snider