If following the assignments of John Jay Jackson's military officers couldn't enlighten me on his whereabouts when he made the decision to marry out-of-town visitor, Sarah Howard Ijams, perhaps following another line of reasoning could yield answers to how they connected.

At least, I can hope.

As the story went, concerning the marriage of John and Sarah, he was stationed at Fort Belle Fontaine near Saint Louis, and she had recently lost her father in Fairfield County, Ohio. Not exactly living in the same neighborhood. Something had to connect them.

Apparently, during the course of his military service, Jackson's captains could be found in Pennsylvania, upstate New York, Upper Canada, up the Mississippi, and even in Indiana—but not in Ohio. How could John have met Sarah?

Perhaps the answer lies more in the camp of Sarah's family and their whereabouts. Remember the post wherein I described my discovery of women—and even children—following the men enlisted in the army during that era? As the men were still building some of the outposts in those western territories, their families sometimes lived in the very quarters the soldiers did.

What if Sarah's dad was one of those enlisted men? Admittedly, I know very little about Sarah's father, William Ijams. About the only detail I've been able to find so far has been a photograph of a very sunken headstone, resting quite precariously in a small cemetery, back in Ohio. According to the records there, William was born in 1748 and died in 1815. He was buried at the Stevenson Ruffner Cemetery, once the site of the Stevenson Methodist Campground in Fairfield County, Ohio.

Admittedly, it was unlikely that women and children followed their men during the height of battle, but after the war was over, would the Ijams family have reunited somewhere near a fort where he might have been stationed?

Then, again, which war would we be discussing? After all, with William's date of birth being back in 1748, his era would more likely be that of the Revolution than the War of 1812. Would he still be in service, as late as 1812?

First step in checking out William's whereabouts would be to see if there was any paperwork on military service for him at all—regardless of which war. Then, to see whether we can ferret out indications of where he—and thus his family—might have been living. Hopefully, these might yield us some clues as to how the Ijams family might have crossed paths with John Jackson. 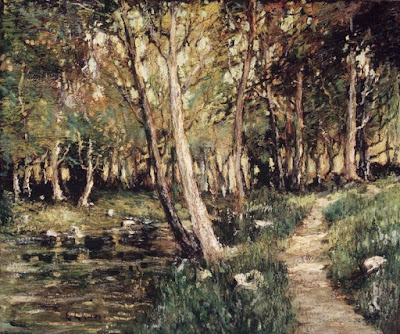 Above: "Landscape," 1915 oil on canvas by Canadian-born artist, Ernest Lawson; courtesy Wikipedia; in the public domain.
© Copyright 2011 – 2022 by Jacqi Stevens at 2:43:00 AM
Email ThisBlogThis!Share to TwitterShare to FacebookShare to Pinterest
Labels: Ijams, Jackson, Military Service