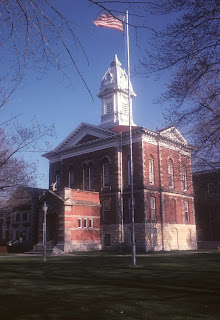 Because having a network of friends and supporters is so critical to anyone embarking on a business endeavor, it is hard to imagine young attorney Richard Flannigan starting to build his practice by moving to an entirely different town. There had to be something drawing him to his new location in Norway, Michigan. Looking into history records, we might be able to tease some information from the data to see what Richard was pursuing in the little town of Norway.

In 1881, when Richard Flannigan moved to Norway—then, up until 1891, a part of Menominee County—he was a single man having just been admitted to the bar in Marquette. Though mining and railroad concerns were to occupy his professional attention in the near future, according to one narrative, it appears his first duty was to serve as Menominee County Prosecutor—although mention is made in a different turn-of-the-century history book that he was actually elected to this position in 1886. According to some reports of the time, he had also capably served “in criminal practice” and as a trial lawyer.

At some time in the late 1880s, though, Richard Flannigan’s practice underwent a shift in focus, perhaps paralleling the succesful rise in the mining industry in this Upper Peninsula region. He became “very active and prominent as a business lawyer, handling extensive business transactions, representing organizations that have large and important financial interests.” By 1890, perhaps in conjunction with his affiliation with these mining interests, he was appointed attorney for the Chicago and Northwestern Railway Company, a position which he held for the next twenty years.

Somewhere in the midst of all this, the town in which Richard Flannigan lived began the process of incorporating as a city. Not surprisingly, Richard had a hand in these legal proceedings, too. Perhaps that is why he found himself elected as Norway’s first mayor upon completion of their incorporation in 1891. Or perhaps he was just an ardent participant in political matters. He did, subsequent to this political position, also serve for eighteen years on the Norway School Board, including a term as its president.

Despite his thriving practice, claiming clients among “the more important mining corporations” of the Menominee Range, and though he also enjoyed success in his minor political role in his new hometown, Richard Flannigan’s career was still pursuing an upward trajectory. Concerning professional recognition and assignments, there was yet more to come.

Photograph, above right: The Menominee County Courthouse in Michigan, which until the 1891 formation of Dickinson County, served as courthouse for the area encompassing the then-township of Norway, Michigan.
© Copyright 2011 – 2021 by Jacqi Stevens at 2:51:00 AM

Email ThisBlogThis!Share to TwitterShare to FacebookShare to Pinterest
Labels: Friends of the Family