A Tale of Three Wives

In seeking to identify the correct person as our ancestor, we always need to be open to the possibility that two people in the same small town could share the same name. Thus, in finding the biographical sketch of a man called Jacob Metzger in the History of Fairfield and Perry Counties, Ohio, I wanted to proceed carefully, in case the entry did not represent our family's kin.

It became clear yesterday that the book's brief entry for a man named Jacob Metzger seemed to better fit the story of a man named Henry Metzger. Granted, not only did Henry live in the same county as someone named Jacob Metzger, but they likely were brothers. Let's look at what we can find on this Jacob Metzger, to see whether his story better matches the biography listed in the Perry County book.

According to the State of Ohio's 1911 death certificate for one Jacob "Metzgar," his father was listed as Michael, just as we'd expected, and same as what we had discovered for Henry Metzger, the man who likely was mis-identified as Jacob in the local history book. Unfortunately, on the Ohio state death certificate, the form's line in which to enter the maiden name of Jacob's mother was marked "unknown"—a common but nonetheless frustrating answer to find on any death certificate.

What is more pertinent to my research goal for this month was the line designated for each parent's place of birth. Both lines indicated that Jacob's parents were born in Germany, much as the biographical sketch in the local history book had indicated for its entry on "Jacob" Metzger.

At the time of his death, our Jacob was listed as having been married, so we can presume that the informant, named Mary Metzgar, would have been Jacob's widow—but we can never be too sure. Better to check for marriage information on this Jacob Metzger of Perry County, Ohio.

Since his death certificate indicated that Jacob was born in 1831, it would be reasonable to conclude that his marriage could have occurred about twenty to thirty years afterwards. Though the copy of the marriage index for Perry County during that time period is too faint for my eyes to read, it sure looks like the name entered for the 1857 (?) event was longer than the four-letter name, Mary. In fact, it looked like Jacob's wife had a given name of Martha Ann. This does not look promising.

As often is required, this called for some double-checking on other records for the Metzger couple in Perry County to see if Jacob's wife was indeed named Martha. In the 1860 census, sure enough, there was the newlywed couple and a likely one year old daughter; Jacob's wife was indeed named Martha. Checking again with the 1870 census, we find Jacob and Martha and their growing family.

Not long after that point, though, Jacob lost his wife Martha, and in likely desperation to find a mother figure to raise his many children, Jacob married again. But don't think that will become the answer to our question about the informant Mary on Jacob's own death certificate, for his second wife was named Lizzie Welch.

Enter wife number three. For your patience, I will cut to the chase and affirm: yes, her name was Mary. She and Jacob were wed in 1891, giving the couple barely twenty years before Jacob's passing in 1911.

To put this in perspective: a wife who entered the family picture that late in the timeline would be unlikely to know enough about the key people in her husband's life to adequately answer the customary questions for a death certificate. Jacob's mother had died in 1844, barely a year after his father—and long before Mary Gordon Metzger entered the family picture. Nor, having not even known Apollonia's name, could Mary have known where her mother-in-law came from.

Jacob's widow Mary—a wife who claimed him as her husband toward the later years of his life—may simply have presumed the identity of Jacob's heritage based on the people he associated with, or possibly even because of the language he spoke around family members. If Jacob's family did indeed come from Switzerland and not Germany—as Mary supposed—that at least signals us to look to the German-speaking portion of that landlocked, mountainous country to find his roots. That certainly doesn't give us a document, but it can serve us as a guide. 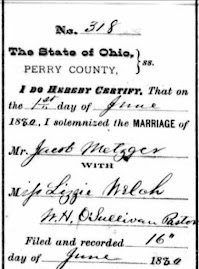