Clues From Maude's Own Story

Though Maude Woodworth died long before Marilyn Bean could ever have met her, the reason why so many people in Marilyn's family subsequently died at a young age may be encapsulated in Maude's own brief story. That likely was also the reason why Maude's likeness did not show up in the photo collection I rescued from Marilyn's sold belongings.

Marilyn Bean's mother-in-law, Maude, had married the most unlikely of eligible bachelors. Samuel William Bean had been born perfectly healthy, and would probably have gone on to become a successful businessman like his twin brother, except for one chance mishap in his teens. Though the family passed down two conflicting stories on the event, for whatever reason, we know that Sam had been injured by a flying object striking him in the eye.

In that era pre-dating the advent of antibiotics—Sam was born in 1896—the infection which began in his eye spread to the other eye, and eventually also to his ears. All told, the injury rendered the teenaged Sam both blind and deaf, a devastating blow to anyone.

It was at the California school for the blind and deaf that Sam Bean eventually met Maude Woodworth. When they were both in their early twenties, the story of their 1921 marriage was carried by newspapers across the country—as far away, for instance, as Alabama and Connecticut.

To think that their two surviving sons—Sam junior arriving later that same year, and twins Earle and the short-lived infant Merle in 1926—might have been afflicted with any malady, a reasonable guess for anyone not knowing the family's story might have been to think of vision problems. After all, the reason that brought both Sam and Maude to the same school in their teen years was their loss of eyesight.

That was not the case, though knowing more about Maude's family might have made answering such a question more complicated. A newspaper article I found through the index to the Redwood City, California, Schellens Collection, a clipping from the January 13, 1921, edition of the city's newspaper, the Standard, mentioned that Maude became interested in teaching the blind when she was a girl growing up on her father's orange grove in southern California. Her father, William C. Woodworth, was also blind, and in her younger years, Maude had served as his "steady companion for many years."

If Maude's father had vision problems, and then Maude herself manifested a similar difficulty, it might stand to reason that Maude's sons would carry the same proclivity, but that was not what afflicted them. It was, as we've already noted, Marfan Syndrome which claimed Maude's sons' lives. But somehow, the Woodworth side of the equation is still the one to follow in pursuing this question, for the Woodworth cousins we discussed yesterday also manifested the same obvious outward signs of the malady.

Tomorrow, we'll follow Maude's story back another generation to William C. Woodworth and Effie Aurilla Williams, to see whether we can find any further signs of Marfan Syndrome in the family lines. 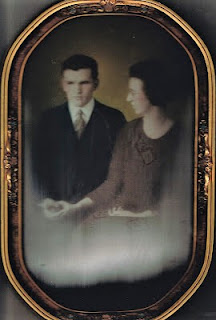 Photograph above: Samuel W. Bean and his wife, the former Maude M. Woodworth. Undated portrait encased in glass, most likely from the 1920s, now in the possession of the author.
© Copyright 2011 – 2022 by Jacqi Stevens at 2:46:00 AM
Email ThisBlogThis!Share to TwitterShare to FacebookShare to Pinterest
Labels: Bean, California, Family Photos, Williams, Woodworth