Included in the set of family photographs I rescued from a Sonora, California, antique shop was a smaller grouping that obviously belonged to someone who knew the William Malphus Knapp family. We've already shared William's own portrait, as well as a family photograph with his wife, Clara Alice, and their (at the time) four children. Now, we're going to step back another generation and take a look at a photograph of one of William's siblings—his baby sister Flora.

It was a good thing this photograph was labeled, because not only did it provide a name for the young lady in the portrait, it help me zero in on the right generation in the Knapp family. You see, William Malphus Knapp had a daughter named Florence, a name which often gets shortened to Flora, but thanks to whoever labeled this photo—with that characteristic scrawl right on the face of the picture frame—the details help us to identify the right Knapp generation. This Flora was daughter of a William Knapp, alright, but the label also told us she was "sister of Wm. + Geo. Knapp."

As the younger William Knapp had a son named William—we'll be meeting him soon, as well—but not a son named George, it is the previous generation to which we'll turn to identify this Flora.

Heading back to the Knapp home in 1880 Douglass, Kansas, if you recall, the family was comprised of William Malphus Knapp's parents, William and Corintha, as well as his younger brother George. The couple had apparently lost two other sons during the time they had moved to Michigan. After a gap of about eight years, along came Flora, born in 1878.

Flora apparently remained in or near Douglass for a good portion of her adult life, where we learn through the 1900 census that she had married, in 1897, a man from Illinois nearly eight years her senior, named Edward Roy Jones.

Despite having married in 1897, though, by the time of the census three years later, Flora and her husband were childless, as they were, also, at the time of the 1910 census. At that point, the only other person in the Jones household was a boarder, Helen Clifford, who worked in Flora's millinery shop.

Before the point of the 1920 census, though, Flora and Roy had news: they had welcomed in a daughter, now three years of age and born in Florida, whom they named Mildred. By the time of that 1920 census, Roy was forty seven and Flora was forty one. They were by then living in Wichita, not far from their old home in Douglass—certainly much closer than wherever their daughter was born in Florida.

The couple may have returned to Douglass after that point, but it is hard for me to tell, as I can't yet locate their record in the 1930 census. By 1933, however, Edward Roy Jones had passed away, and though his wife outlived him by another two decades, they were both buried back in Douglass, Kansas. By the time of the 1940 census, the widowed Flora was living in Wichita in her by-then married daughter's household, along with two young grandsons.

What is encouraging to me is to find a few family trees posted in Ancestry.com which relate specifically to Flora's daughter's family. Perhaps that is a good sign; Flora's photo may make its way back home soon. What may complicate that possibility, though, is that some of those direct descendants haven't checked back to update their tree in over a year. If I send a message via their Ancestry account, they may or may not respond.

We'll just have to wait and see—for Flora's photo as well as several others. Perhaps this is just how things go in the avocational genealogy research world. While Life happens, sometimes family history has to wait. 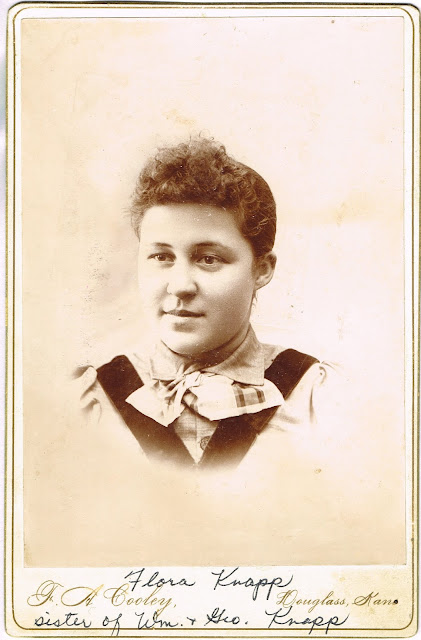 Above: Photograph taken in Douglass, Kansas, of a young Flora Knapp, baby sister of William and George Knapp; photograph currently in possession of author until claimed by a direct descendant.