After having located photographs coming from as far away as Poland, Germany, and Montreal in Canada, that's what turned out to be the case for the last set of family photos we've been reviewing. All those Brockman and Purkey family photos I've been sharing these past few months were likely recent possessions of a Brockman descendant who settled in northern California for those golden retirement years.

The same thing is likely happening now, as we move from the many photos connected to that Sonora, California, estate to a collection of pictures from what I believe is a totally unrelated family. Many of the photos in this set were well marked—albeit irritatingly on the face of the picture, rather than more discreetly entered on the reverse. The photos also had one other distinguishing mark: they were each stored in a clear plastic container, sealed with tape—likely of the type that would make a proper archivist cringe. As much as I believe in the sanctity of provenance, I couldn't shake the compulsion to gingerly remove the photos from their encasement, so—confession time, here—they are freed, at last.

Now, to get down to the business of researching just who these people were so we can see their likenesses sent home to family. We'll begin with a little overview of the patriarch of the family, a man named William Malphus Knapp.

"Malfus," as it turns out, is an important middle name to keep in mind. As this William was named after his father—also a William, though his middle name was different—the two were differentiated by the use of the younger William's middle name. And that, as we see through various spelling permutations such as the example in the 1880 census, is how we can find him when an abundance of hits for a name as common as William Knapp overwhelms us.

Though I was able to locate "Malphis" as a young teenager in his parents' household in Douglass, Kansas—making him one of 369 inhabitants of a city whose founding occurred after young William's own 1867 birth—don't think he remained a resident of rural Butler County for long. Perhaps because his father was a carpenter, and thus of an occupation enabling the family to travel to find work, or perhaps because of his family's history—his father was born in Ohio to Canadian parents—William, too, eventually moved on.

That twenty year gap from the 1880 census to the next available United States enumeration has been bemoaned by many researchers, and with this next step in the younger William's chronology, I add my voice, once again, to this chorus. Still, we can read the tea leaves in the murky recording of the 1900 census, and realize that, after his birth in either Indiana or Michigan (each census gives a different response), his path led him to marry an Illinois gal who had moved to Butler County some time before the 1885 state census.

According to the 1900 census, William married Clara Alice Hoover around 1891, and they welcomed the first of their many children, Richard Samuel, in November, 1892. From that date through the 1897 arrival of their daughter Corintha—named after William's by then long-deceased mother—the family remained in Kansas. With the addition of their son Charles, as we can see from the enumeration itself, the Knapp family was now resident in Klickitat County in southern Washington State.

If William Malphus Knapp had remained in Washington, I might have considered my acquisition of his abandoned family photos as just another case of a collection sent, over the years, to a relative in nearby California. In this case, however, I think it is a bit more convoluted than that simple conclusion. You see, not much after that 1900 census, William returned to the midwest, where he died in Oklahoma in 1908. By the time of the 1910 census, his widow and children remained in Major County, living with Clara's father, Samuel Hoover.

If William and Clara Knapp ended up in Oklahoma, though, what was the connection that brought all those Knapp family photographs to a home near Sonora, California, location of the antique shop where I found them? It's in the subsequent generations where I think the answer lies. Before we get to that point, though, let's meet the rest of the family, which will be easily accomplished, thanks to the information provided on each picture.

Whoever kept that set of Knapp family photos was someone intent on remembering exactly who they were, for each one came with a thorough label. For today, we'll begin with the picture of William Malphus Knapp, himself, and tomorrow, I'll begin introducing the rest of his family to you. 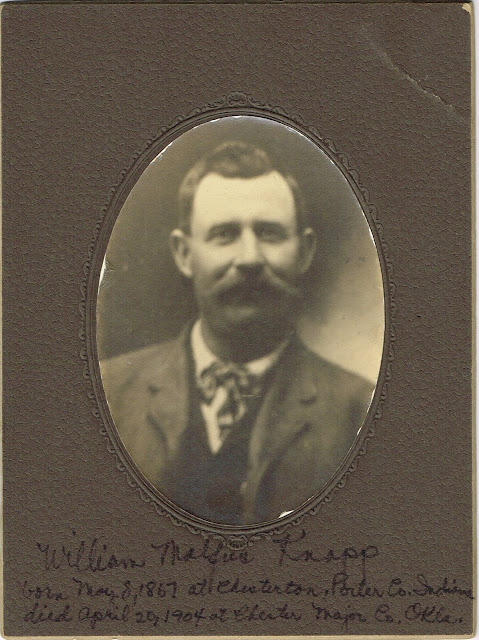 Above: Photograph labeled "William Malfus Knapp, born May 8, 1867 at Chesterton, Porter Co. Indiana, died April 20, 1904 at Chester, Major Co., Okla." Photograph with written entry as found at antique store in Sonora, California. Photograph currently in possession of author until claimed by a direct descendant.
© Copyright 2011 – 2020 by Jacqi Stevens at 2:46:00 AM