While I am floundering to figure out who my paternal ancestors were, and where they originated in Poland, I need to set aside the false start of that story to jump back in time to conclude another research story. The journey of that little photo album I found in an antique shop in northern California has finally reached its destination at the place where it originated in County Cork, Ireland.

This is a story long awaiting its conclusion. I found the album a couple years ago—at least I think; I didn't really mark down the date. The first post here on the story of the photo album came almost eighty years after the tiny package was mailed as a Christmas gift in 1936. By April of this year, I had discovered the identity of, and made contact with, a living granddaughter of Harry and Alice Hawkes Reid, the couple who sent the album. The Reids' granddaughter, Heather, helped me figure out who might have been the recipient, and with that hunch, I mailed the album to a relative, Rita, living in the States.

The final step in the plan to take this album full circle back to the originating family was for Rita's daughter Lollie to bring the album with her on her travels to Ireland this summer. At that point, Lollie would present the album to Heather, and the journey would be completed.

I received the news just a couple days ago, and was elated to hear. As planned, the two women—who are actually second cousins—met in Ireland. As a kind gesture making me feel a part of the process, they arranged to send me photos of the occasion, which I definitely appreciated.

Even though I've researched almost every step of the way from the sending of that album in 1936 to its discovery a few years ago in northern California, it still amazes me to realize that that one small package had made a trip with so many winding detours. More than that, it fascinated me to see all the stories that can be gleaned by studying one solitary object representing a sliver of the lifetime represented by just one family. Such a few pages offered up so many hints to a family's history!

Perhaps camping on that thought for this season will help encourage me, as I delve into the same process once again—only now, rather than names from Ireland, this time with a few names from Poland. 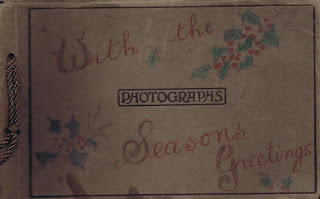