A Different Sliver of Life


While some families are sending their children off to the first day of school this week, others may be playing hooky. In fact, every time I heard someone tell me their family was taking a vacation this week, my mind flew to one particular reason to take a trip at this late date in the summer: to find the most advantageous spot to view today's solar eclipse.

Solar eclipse mania has captured the attention of a good number of people in this country, where the time of occurrence coupled with the abundance of promising viewing situations makes it an accessible activity for many. A friend of mine drove northward earlier this month with plans to rendezvous with other traveling friends somewhere on the path of the eclipse in Oregon. Likewise, my husband, squeezing a flight northward into his busy schedule, will blend taking in the solar spectacle with some much-needed social time with a good college buddy.

One thing that hasn't been lost on me, in the midst of this astronomical activity, is the predictable regularity of such signs in the heavens. Tracking the records of people who tracked the eclipses has given us an idea of how early in history such things were noticed—and calculated. In fact, there's even a name for someone who pursues such a study: archaeoastronomer.

Records from over five thousand years ago in Ireland helped one archaeoastronomer determine the precise date for an eclipse corresponding to the arrangement of one specific megalithic monument in County Meath, Ireland. Similar records from China, ancient Babylon and Greece align closely with the dates of other eclipses. Solar eclipses in particular have long captured the attention of our fellow human beings.

Once people have been able to determine the reason for these alarming celestial occurrences, it wasn't long until they could predict such events in their future. Of course, with technology and equipment at our disposal today, that dating system has been finely honed.

While you and I may not have the wherewithal to determine even who our ancestors were who viewed the eclipses of past millenia, we have at our access lists of dates for when these solar events occurred. A quick consultation at lists such as this five millennia catalog, provided by Wikipedia, can also allow us to learn when the more accessible of our ancestors might have looked upwards in wonder at the drama unfolding across the face of the sun.

Of course, for those who have letters or, better yet, diaries of their relatives from past generations, they may be privileged to learn when such events occurred in the lives of their family—and what those past family members might have thought about the eclipses of their day. For those of us who don't have such treasures, we can still learn the dates when our ancestors may have viewed various solar wonders—total, annular, or partial—just by consulting such lists as this one for eclipses of the 1800s.

When we think of assembling the family history of our ancestors, there is so much more to include than those stark realities of names, dates and locations of birth, marriage or death. The small but significant events that occur in our lifetimes have also, in one form or another, occurred in the lives of our forebears. When we think about these key events in life and how they might have intersected with the life stories of our great-grandparents and those who lived before them, it somehow brings their stories to life so much more crisply than the plain recitation of dates and places ever could.

And with the realization of these commonalities, we are gifted with a stronger sense of connection with the very people whose genes gifted us with the characteristics and tendencies that make us who we really are. 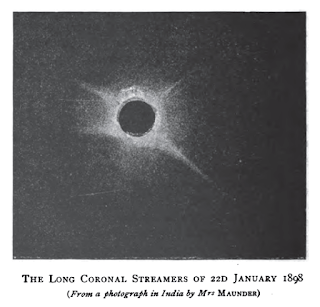 Above: "The Long Coronal Streamers of 22d January 1898 (from a photograph in India by Mrs. Maunder)" from page 230 of the 1900 book by Mabel Loomis Todd, Total Eclipses of the Sun; courtesy Google Books via Wikipedia; in the public domain.

Email ThisBlogThis!Share to TwitterShare to FacebookShare to Pinterest
Labels: Getting the Big Picture