Meanwhile, In a Home Nearby

As sometimes happens, people who meet in faraway places turn out to have roots in the same neighborhood back home. When I first met my future husband, I was told he was from Houston, and he surely must have been aware that I was from New York. We met in California. Come to find out, years later, his mother and mine grew up not sixty miles from each other in central Ohio.

It was pretty much the same way with the youngest Davis child—my grandfather, Jack R. Davis. He met and married a woman from Florida whose maternal relatives lived just a short drive up the road, the next county over from Erwin, Tennessee.

As I go through the papers left behind by my aunt—and, by extension, her parents before her—I’m beginning to reconstruct a few of the details of family life for Mr. and Mrs. J. R. Davis of Columbus, Ohio. I couldn’t help but note that, unbeknownst to me, my grandmother once took up an interest in family history, herself, as revealed by letters she saved from correspondence with both relatives and strangers researching the same family lines.

The letter I’ll begin sharing today was sent to my grandmother—her name, given at birth, was Ruby, but she chose to change it, unofficially, to Ruth in her adult years—by her aunt in Tennessee. It was obviously a letter responding to my grandmother’s inquiries into some details about her parents’ history.

The woman sending the reply signed the letter, “Aunt Nellie.” Her return address on the envelope—thankfully, saved as well, for the letter itself contained no date—displayed Johnson City, Tennessee. An easy fifteen miles up the road from Erwin, Johnson City and vicinity was home to Ruby’s mother’s family, the Thomas T. Broyles family. Nellie, by now widow of Thomas Franklin Jones, was born Mary Nellie Broyles on July 6, 1875, in nearby Jonesborough in Washington County—the younger (and only surviving) sister of Ruby’s mother, Sara Ann Broyles McClellan. By the time of this letter in 1969, Nellie was well over ninety years of age. 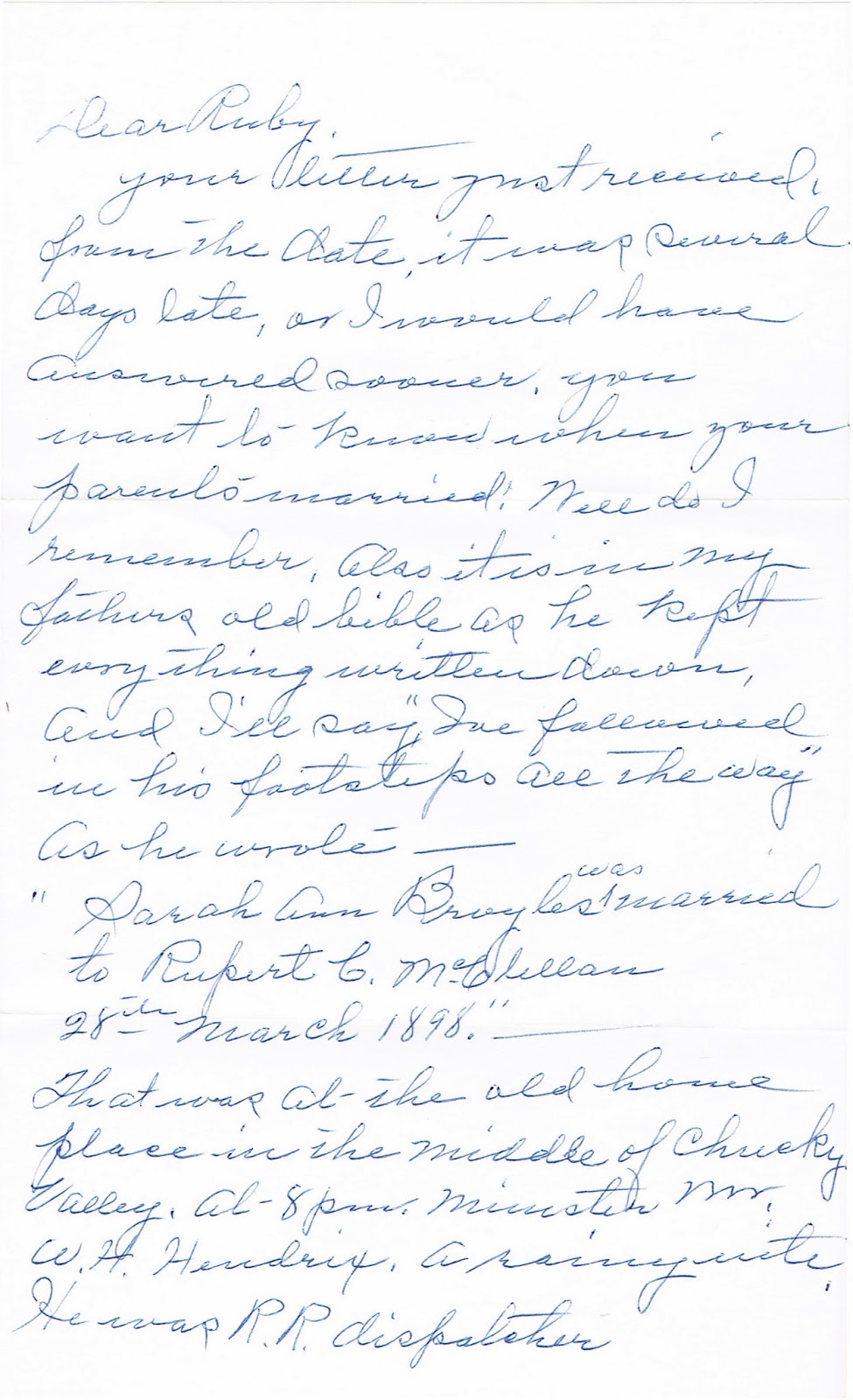 Dear Ruby,
Your letter just received, from the date, it was several days late, or I would have answered sooner. You want to know when your parents married? Well do I remember. Also it is in my father’s old bible as he kept everything written down, and I’ll say, “I’ve followed in his footsteps all the way.”
As he wrote—
“Sarah Ann Broyles was married
to Rupert C. McClellan
28th March 1898.”
That was at the old home place in the middle of Chucky Valley. At 8 p.m. Minister Mr. W. H. Hendrix. A rainy nite. He was R.R. dispatcher.
© Copyright 2011 – 2020 by Jacqi Stevens at 2:47:00 AM