Let's take a break from zeroing in on the particulars of Nicholas Schneider's early life in Germany. While I gather my wits and, behind the scenes, rehash what other researchers have already asserted about Nicholas and his wife Anna Elizabeth Eckhardt, it might help to turn our thoughts to the ever-instructive concept dubbed the "F.A.N. Club."

The acronym stands for Family, Associates, and Neighbors. The thought behind this concept is simple: rather than striking out on their own as individuals, people tend to do things in groups with the people most familiar to them. While sometimes the groups are composed of friends, and other times represent families or close-knit communities, people in past eras found it safer, wiser, and more supportive to undertake significant projects with a support group.

I bring that concept up simply to recall one thing I've noticed about the settlers of Perry County, Ohio: they certainly seemed to be a tight-knit circle of communities. More importantly, I have noticed a good number of the early settlers had two details in common. One was that they were devoted to the Catholic faith. The other was that several seemed to have traveled to Ohio from an oft-disputed region of Western Europe. Sometimes claimed by the French, other times by the Germans, Alsace-Lorraine, as it once was called, produced a number of subjects who decided to leave for good—and ended up in Perry County.

We already know from the passenger records found for Nicholas and Anna Schneider that their vessel sailed from Emden, Germany. Granted, immigrants from all over the region would travel to a port city on their way to the New World, so it is absolutely probable that the Schneiders did not originate in Emden. But I have my doubts about one location proposed by others researching this family: the city of Mainz. Checking a map, I discovered the distance from Mainz to the port at Emden is about the same as a trip from my home in northern California to Los Angeles: a drive on the interstate of over five hours.

Instead of staring at that brick wall right now, what if we switched our approach momentarily to compare the eight great-grandparents of my mother-in-law? All eight had roots originating in Europe, and all eight ended up in Perry County, Ohio. Could some commonality have drawn them to the same location?

Besides the two Snider lines in my mother-in-law's roots, the other surnames included two Gordon lines (yes, related), plus Flowers, Stine, Metzger, and Mutter (or Mooter). While Gordon does look suspiciously like a Scottish surname, others who knew the founding immigrant ancestor said he spoke with a thick accent, causing some to wonder if he were actually German. Flowers, too, is a line which has me stumped—possibly French, possibly German, almost certainly not English. Stine was likely Stein in the homeland, wherever it was. And Metzger and Mutter originated in Switzerland.

While that seems, overall, to point strongly to German possibilities for the Schneiders' origin, I am still wondering about those borderlands. If DNA companies like Ancestry are still struggling to delineate ethnic identities in border regions—if, indeed, it would even be possible to definitively do so—would an origin such as Alsace-Lorraine throw them off?

It occurred to me to take a peek at the newly-released SideView™ technology at Ancestry.com. After all, though this recent development can't specifically say which side of their readout represents the test-taker's father, and which is the mother's results, I have it rather easy in this case. My mother-in-law married a man whose eight greats all came from Ireland. Other than a surprise sliver of unexpectedness (one percent attributed to Wales), my father-in-law's results would plainly reveal which side of the circle was his projected ancestry. 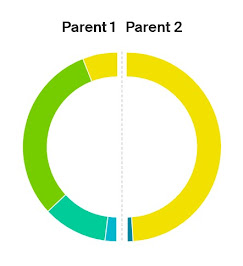 What we see on the left of this diagram, labeled "Parent 1," would be the hypothesized geopolitical origins of my mother-in-law. As you might have guessed, knowing Parent 2's origins in Ireland, the yellow on the left side also represents some Irish roots for my mother-in-law. The large bright-green segment is the color code Ancestry labels "England and Northwestern Europe." Yep, that gray zone of indeterminable ethnicity is now painted green. Almost as if to pacify our inquiring minds, the next greenish color bar represents "Germanic Europe," and the final sliver on my mother-in-law's readout is for France.

While one might presume that such a readout infers that one ancestor bestowed the French heritage and another ancestor was the source of the German ancestry, it is possible that the unclearness of the readout could also be due to as-yet unrecognized ethnic groups sandwiched in between those disputed borders. Whoever such people were, they might have been surviving in spite of their overrun borders—and yet somehow genetically influenced by these same ongoing pressures.

Not that all from that region had flocked to one single location in central Ohio, but it is quite possible that the word had gotten out, spreading from the earlier settlers from that homeland to guide the later arrivals. While that doesn't give us a definitive answer to our question of where Nicholas Schneider originated in Germany, it at least suggests we narrow the scope of possibilities to the western border of what we now know as modern-day Germany.