Decisions, decisions...a day full of these can be wearying, indeed.

Since I need some wiggle room before jumping in to fill that now-empty fourth drawer in my file cabinet, my fall cleaning schedule requires me to consider what I've stowed in the drawer directly above it.

That's where my progress hit its first brick wall. Yes, I've already unearthed some old calendars and checkbooks; that was easy. But all those file folders? They come filled with stuff made to spirit someone right down ye olde memory lane.

Sometimes I surprise myself with the stuff I've stashed. In today's case, it was a bunch of files on family obligations. In the folders I encountered today, I've come face to face with all the medical records tracking my mother's progress—outcome poor, I assure you—after she suffered a broken neck from a car crash over ten years ago. Less than a year later, she was gone—all, that is, but the important papers I snatched up for reference when we went to clean her house before putting it on the market.

Then, there was the reminder of an eerie repeat of the broken-neck scenario when my aunt slipped and fell in her own front entryway, right before Christmas a few years ago. The same struggle to regain her health continued bravely until her own passing almost a year after that accident. Of course, I have all the medical notes from long-distance conversations with caregivers on her behalf, as well.

What to do with these documents? Obviously, the need to hold on to these records is no longer imperative. Perhaps it's the emotional need that superseded it. I may be ready to move on now, but that strange compulsion to thoroughly go through each page once again haunts me.

Such is the emotional baggage that lingers with each piece of paper we feel the need to save "until later." One never knows, ya know?

Progress is pretty slow at this stage. At least I found a way to speed up the process: separate the papers into two files. One stack is the non-medical, non-personal pile of stuff: office supplies that can still be used, once stored in the right place, or clippings from old magazines that once seemed useful—but for reasons I now have forgotten. The other stack becomes those medical files and other records I'll need to consider carefully, then likely shred.

It's odd to realize how the importance attached to papers really represents the people about whom we care so deeply. We—or, at least, I—have almost as much difficulty saying goodbye to those pages as I did when I said goodbye to the person the papers represented.

Needless to say, this part of The Cleanup will take an inordinate amount of time. That, however, is okay. I wouldn't trade this problem for a life in which nobody mattered. Despite all that glib advice about tossing stuff that hasn't been "used," nobody ever said getting rid of clutter would actually be easy. It's not the clutter we're facing in this project; it's the meaning behind it. 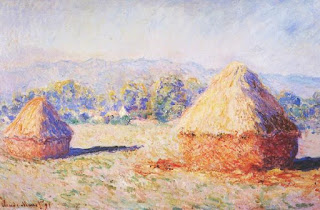 Above: "Grainstacks in the Sunlight, Morning Effect," 1890 oil on canvas by French Impressionist painter Claude Monet; courtesy Wikipedia; in the public domain.
© Copyright 2011 – 2020 by Jacqi Stevens at 2:48:00 AM