Day Eleven: "A" is for Ambrose


With the two lowest drawers in my erstwhile genealogy file cabinet emptied of all their former paper occupants, it's time to move on to some real old family history notes. I'm jumping over the nitty gritty of the mundane side of this Fall Cleanup project—the part about moving files, fixing the frame for my hanging file system, emptying and adjusting old folders—and going straight to my first file folder in that top drawer.

As much as I could, I filed stuff by surname, in alpha order. Sure, there were other topics listed (which, once upon a time, were stacked in alpha order in a drawer all their own, before Life got in the way and evicted them for more urgent topics). This, now, becomes my first chance to take a long look at each folder and decide what to keep and what to add to the next recycling pickup's shredding pile.

Nothing is ever simple, of course, and as much as I'm currently obsessed with the history of us as digital-age genealogists, I couldn't even make it through one measly file folder without getting sidetracked by all the fascinating details.

This was, after all, a folder complete with all my correspondence exchanged with other researchers pursuing the surname Ambrose—circa 1999.

Ambrose is a surname way at the other end of my mother-in-law's family history—the point at which they arrived in the New World from places as-yet unknown. I know they were once living in Frederick County, Maryland, when Maryland was merely a colony in the expansive British Empire, not a tiny state in the U.S.A.

The patriarch of this particular line, best I can tell from those 1999 inquiries with other Ambrose researchers, was a man named Matthias Ambrose. Born in Germany in what, on his headstone from 1784, looks like the date 1696, he was buried in Frederick County.

His namesake son, however, died in Bedford County, Pennsylvania, having listed the two daughters of interest to my mother-in-law's line in his 1804 will—thankfully—before his passing. Those two Ambrose daughters—Elizabeth and her younger sister Susannah—happened to marry two Flowers men, Joseph and his older brother, John Henry, and eventually settled in Perry County, Ohio. That line of Joseph Flowers and Elizabeth Ambrose eventually became the far end of the patriline ending with my mother-in-law's father.

Long before Ancestry.com became the go-to online resource it has become today, researchers had several options available to them, besides the typical on-site route. Services such as my Prodigy connection hosted online interest groups, and you can be sure there were several options for genealogy enthusiasts there. Anyone who used a desktop-resident genealogical database management system could usually find a users' group, or even a special website devoting space to "User Home Page Reports," such as the one dedicated for that purpose at the erstwhile Family Tree Maker's Genealogy Site, where I found one user's "home page" detailing all her Ambrose connections.

I developed long-term email relationships with researchers at both of those online resources, and from other resources as well. One helpful site was the one known as Rootsweb. Now hosted by Ancestry, the free site included mailing lists for geographic locations as well as surnames. I preferred using the geographic lists, organized first by state and then by county, where I could sign up in "digest" form to receive all communications on Frederick County, Maryland, and could inquire about other researchers seeking those Ambrose ancestors.

The same went for another online message board, GenForum. At both places, I'd regularly post inquiries seeking other researchers working on the same lines. Some of those connections led to diligent researchers, who often were situated closer to the geographic area, making it easier for them to access cemeteries or newspaper articles of interest to the other kazillion distant Ambrose cousins also seeking the same details.

Sometimes, the connections were as simple as the cheery note from one Ambrose researcher:


I'm also working on the Matthias Ambrose line, being a descendant of his daughter Catherine, who married Johannes Weller. From which child are you descended?


Some of those notes I've saved from 1999 led to bigger discoveries and sharing of resources. A note that began, "It's always great to find another Internet cousin!" connected me with a direct descendant of the Ambrose grandparents of Elizabeth and Susannah—but don't let that dizzying genealogical distance distract you; it's the amount of information she was willing to share, via email, that was significant.

While some researchers showed up to humbly ask for help, others checked in online as a resource to others. Their offerings were often impressive, like those of one woman who I first met on account of her query about land records and "liber abstracts" in Maryland. It turned out she was willing to share extensively her discoveries on the Ambrose surname in general and the family tree in particular.

Of course, for each significant exchange I engaged in, I felt compelled—in that 1990s style—to print up those emails and file them under the applicable surname. Thus, the folder labeled Ambrose, my first job to tackle while decluttering my file cabinet.

Now, I'm not so sure I can just chuck those items; they call me back to an era in which like-minded researchers shared their keen interest in specific details of ancestors long gone. It was a time of collegial courtesy, an opportunity to share as well as receive.

After I had helped one Ambrose researcher with a particularly insightful question, he sent his cordial thanks, along with this remark:


In a world so troubled as the one we live in, I cannot express the joy that I have gotten from genealogy and the wonderful people I have been lucky enough and privileged to meet.


How can I toss a correspondence like that? It has not only become a document of the path we collectively took to rediscover our forebears; it has become an example of one era in the ongoing history of genealogical pursuits that, in retrospect, takes on the aura of a golden age of cooperative effort. 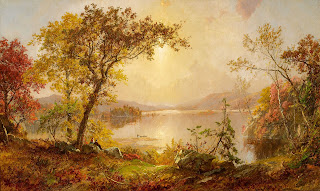 Above: "Autumn on the Hudson," 1875 oil on canvas by Hudson River School landscape artist Jasper Francis Cropsey; courtesy Wikipedia; in the public domain.
© Copyright 2011 – 2020 by Jacqi Stevens at 2:53:00 AM