For as imposing a topic as the American civil war, you'd think it would take me much longer to dispatch with the folder I pulled out of my nemesis file cabinet today. Under "C" for Civil War, it was the item I was due to tackle today, and thinking of all that conflict meant to our nation's history, it should have given me more pause to consider.

Thankfully, it didn't. The only research question I've faced—at least on the Union side—was whether I could find any records of my husband's great grandfather, John Tully, having served. After all, according to a long-winded version of his obituary, the man had served under "General Hooker." I can only presume this means Brigadier General Joseph Hooker.

Despite that note in John Tully's obituary, I never could locate any record of his having served. The folder I encountered in today's installment of The Cleanup reminded me of my attempt, back in 2004, to locate anything at the National Archives. I had saved files containing instructions on how to research the matter, back at that time, and records of my having located a possible John Tully—and paying the fee to gain a copy of his record.

Even so, that attempt was short-circuited when a kind employee, in the process, mentioned to me that he thought I might not be ordering the file for the right John Tully. I recall—though there is, unfortunately, no record of the exchange in this file folder—that the employee mentioned this John Tully had moved, after the war, to North Dakota. Thinking, at the time, that my John Tully had returned to the family home—then in Chicago—that North Dakota wasn't in the picture for our family history.

Of course, it was only later that I learned John's sister Johanna had moved with her branch of the family to North Dakota, so there was a connection, no matter how slim. If only I had thought to continue with the process. After all, what's another thirty seven dollars?

Now, with subscriptions to Fold3 and other research resources, surely I could replicate those files—or at least some smattering of something that could verify the information contained in that email exchange. At least, that's what I thought, as I worked through that Civil War file. But some things just need to be snatched when they are first spotted; I haven't been able to find anything now.

In the end, most of the links provided in the articles saved in that folder are so outdated that I decided to toss the entire folder. Score one for "progress." I'm on to the Ds. 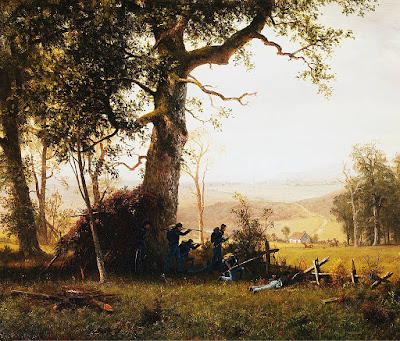 Above: Civil War, Picket Duty in Virginia; oil on panel by American artist Albert Bierstadt; courtesy Wikipedia; in the public domain.
© Copyright 2011 – 2020 by Jacqi Stevens at 2:43:00 AM