Cars: You Knew This Was Coming

It’s one thing for a young man to be in love with his car. It’s another thing when that young man decides to make cars his life calling.

That’s pretty much what Bill Bean did. Starting from that age which conjures up some sort of magnetism between cars and guys, Bill was always headed in whatever direction would lead him closer to the subject he loved.

There are quite a few photographs in the Bean family photo box that have proved to be absolutely no mystery to me, for I’ve always known about the car dealership in Alameda that Bill owned, along with his partner. While in the later days when I knew him, the only car it was permissible for anyone in the family to drive was a Chrysler, what I didn’t know was that Bean and Cavanaugh got their start not as a Chrysler dealership, but with Plymouths and DeSotos. 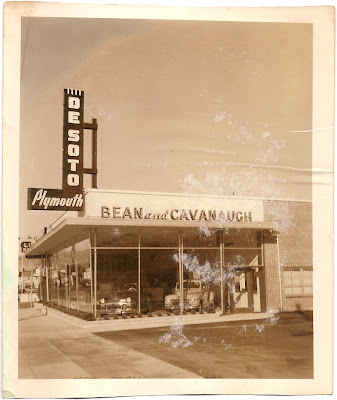 © Copyright 2011 – 2022 by Jacqi Stevens at 2:47:00 AM
Email ThisBlogThis!Share to TwitterShare to FacebookShare to Pinterest
Labels: Bean, California, Cars