Since I'm stalled on my way to discovering more about Maude Woodworth's family, that is exactly the strategy I'll use right now. Maude's father William came with his parents to the region of southern California once known as the Azusa valley (today considered the eastern part of the San Gabriel Valley). William Woodworth eventually raised oranges—a detail I gleaned from an article about Maude—on the property once owned by his father, Lafayette D. Woodworth.

Finding the exact location of the property, though, has been difficult, especially searching from a distance while relying only on online resources. Once I realized that available plat maps for the region wouldn't provide the information I was seeking, I moved to the next tactic: rather than researching a specific piece of property, I'd delve into the details of the history of the place where the property was located.

No matter which location I'm researching, in the midst of stalling out on my family history journey, researching the history of the place which that family once called home always provides helpful context. In the case of Maude's hometown—Covina in southern California—it helped to overlay the Woodworth timeline upon that of the broader Los Angeles County region, the former Mexican "rancho" land grants, and the development of the city of Covina.

Though the Woodworths arrived in southern California from Iowa in 1886—at least, if the report in William's obituary is accurate—to say that they came to Covina can be somewhat misleading. Though land developer Joseph Swift Phillips founded the town of Covina in 1882, the city was not officially incorporated until 1901.

That land, however, was obtained through a series of purchases from holdings of the original grantees of a Mexican land grant known as Rancho La Puente. Details of the many land exchanges are fortunately outlined in several documents I was able to find online, thanks to the search prowess of Google—everything from a brief history of the city to a detailed multi-century timeline included in the blog Covina Past and even to the "Covina Town Center Historic Resource Survey" posted on the city's website, where the historic account isn't taken up until page twelve of the fifty-four page document.

Somewhere along the way, talk of the "famed Boom of the Eighties," identified as occurring during 1886-1888, pointed directly to the year when the Woodworths arrived in the valley—presumably with plenty of company from their fellow midwesterners.

Though that didn't reveal anything further to me about the Woodworths' own family history, it enabled me to put their decision to move into the context of the bigger picture of current trends, both back in Wisconsin and Iowa where they once lived, and in the vastly different terrain into which they were about to relocate.

I'll still want to track down a map detailing the location of the Woodworth property, but learning that the family settled in a once-agricultural valley which eventually boasted the rank of third largest orange producer in the world helps me understand the motivations which transformed a Wisconsin farming family into specialists in citrus fruit. 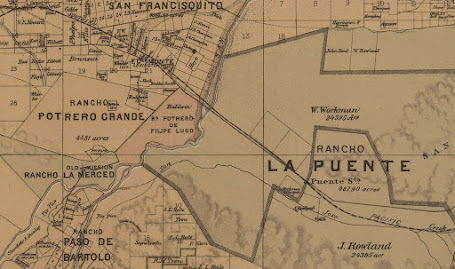