Sometimes, when researching ancestors, all the details seem to fall into place a bit too conveniently. With too many coincidences. That's when I hesitate to presume I've found the right person.

Right now, we're trying to trace the line of Maude Woodworth Bean's maternal grandfather, Eugene Williams. It seems reasonable to assume that, coming from a place called Marcellon in Wisconsin before the Civil War, Eugene would fit into the household of the only Williams family I could find in that tiny town. That household represented the family of Martin Williams who, within the scant space of one decade, led us back to New York and the household—possibly—of his own father, Solomon Williams.

That may seem more like magic than meticulous research, and my brain screams out, "Not so fast!" There's got to be another way to double check this information.

Double checking is always good. Genealogists always need to be on the lookout for name twins—and certainly resist the urge to be lulled into complacency by coincidences. I went back over my records for Eugene Williams, and began noticing something unusual. It seemed that for the rest of his life, wherever Eugene showed up, there would be this guy named Martin Williams, too.

I found the first sign in a record of all persons "subject to do military duty" in the area of Wisconsin where Eugene had enlisted during the Civil War. This record was a "consolidated list" and it included the name of one Martin M. Williams, forty one year old farmer from New York. At that age, could he have served, along with his sixteen year old son Eugene?

It took some searching to find more detail. Though he lived in Wisconsin at the time, the only service record I could find was for a Martin M. Williams who, according to muster rolls archived through the Illinois Secretary of State (searched under "Williams, Martin M."), served in Company C of the Ninth Illinois Cavalry. Strangely, he was mustered in on March 17, 1865, not in Wisconsin, but in Chicago, Illinois. Seven months later in Selma, Alabama, Martin was mustered out.

That scenario seemed quite a stretch for me, despite the age given for this Martin agreeing with what I had found so far for Eugene's dad, so I looked further. Noticing that, in the land record for Eugene Martin, right alongside his record was a mention of someone named Martin Williams. Yes, in the same location in Union County of what is now South Dakota, too close a coincidence to have been two strangers. In the same tiny place of less than four thousand people. That couldn't be a coincidence again, could it?

Whoever this Martin Williams was, he remained a farmer in Union County through the 1880 census—and, incidentally, served as his area's census enumerator. By then, his son (maybe) Eugene and his wife and children had moved back into town, to the county seat of Elk Point, and then, over the years since, "back east" to Iowa, before moving all the way out to California.

Tracing Martin Williams after the 1880 census was enough of a challenge to make me wonder whether he might have had a double, after all. A Find A Grave memorial at the Elk Point Cemetery for one M. M. Williams gave the date of his death as March 2, 1882—but a record of the order for Martin Williams' military headstone showed the date of death to be April 1, 1897. 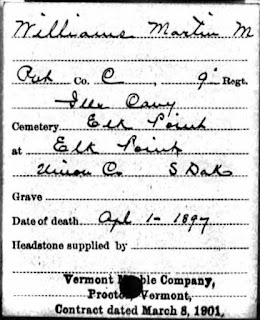 Helpfully—at least I hope—a Find A Grave volunteer transcribed an obituary for a Martin Williams which gave the time of his passing as February 1, in a newspaper published in 1896. That obituary indicated that Martin and his second wife had moved from Union County, possibly first to Iowa before returning to South Dakota and settling in Hand County—or was that yet another Martin Williams who had served in the war and then settled in Dakota Territory? A search for the actual newspaper article is in order to double check, once again.

Too many such coincidences flying at me this quickly make me want to dig in my heels and look more deeply for clues to sort out all these identities. And yet, as I do so, I discover even more ways to doubt the records on the extended Williams family.

Above: Copy of card indicating the order for a military headstone for Martin M. Williams, to be sent to Elk Point in South Dakota, courtesy Ancestry.com.

© Copyright 2011 – 2022 by Jacqi Stevens at 2:59:00 AM
Email ThisBlogThis!Share to TwitterShare to FacebookShare to Pinterest
Labels: Property Records, Wars, Williams