When best-laid plans go awry, there's only one choice for a researcher who wishes to keep going: get back to work on the next best solution. I'm still hoping to return the hundred year old photograph I found in a California antique shop to a descendant of the sisters Mollie, Nellie and Alta Barnes. I just need to find a suitable candidate.

My brilliant idea to contact a fellow family historian via the Ancestry messaging system apparently yielded no results. Granted, it's my impatience that's willing to call it quits on that attempt after only one weekend of waiting. On the other hand, I took another look at the researcher's entry at Ancestry: last logged in "last month" may be warning number one that I won't likely hear from this person any time soon. (Then again, I just checked my own profile; according to Ancestry, it's been four days since I logged in—not!)

I'm less than excited about building out that Barnes family tree for any more generations. This is a family which has stayed close to their hometown, as far as I can tell, making it less likely that one of their descendants became the recipient of the photograph in California. Yes, they did wander from their location in Cowley County, Kansas, but it was only briefly: once, to Kay County, Oklahoma when Alta Barnes was born.

I've since discovered that one of Alta's maternal first cousins (and fellow Kansas resident) also spent time in Kay County, Oklahoma, where he got married, though it was decades after Alta's birth. An important clue, perhaps—until I learned that it's barely a twenty mile hop across the state line to get from one location to the other.

Working my way backwards to the older generation—Alta's parents' siblings—shows that the family was firmly ensconced in their Kansas digs, even back then. And those folks' children stayed close to home, too, once they grew up, married and had children of their own.

I suppose I'll thrash around, banging against even further obstacles in an attempt to locate someone who is close enough to this line to trigger interest in obtaining the photograph of the three sisters. In the meantime, I did discover one cousin with a delightfully different name, whose unique moniker may help me locate something more on the family, so I'll post a bit on that tomorrow. Never underestimate the power of cousin bait on a genealogy blog.

Without any further clues, though, I may have to tuck this photo away in a "hold" file until the day when someone, on a lark, Googles their ancestor's name and wanders through the Internet to find this site. That's just fine, though, because I have several other rescued photographs to share, just waiting in the wings until Alta's photo steps out of the spotlight. 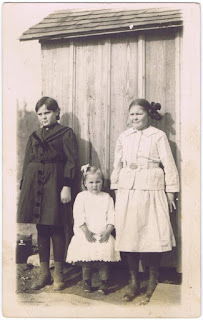 © Copyright 2011 – 2022 by Jacqi Stevens at 2:51:00 AM
Email ThisBlogThis!Share to TwitterShare to FacebookShare to Pinterest
Labels: Barnes, Family Photos, Kansas, Oklahoma