Day Twenty-Four:
When People Get to Talking


Despite my guess, yesterday, that the next folder to work through in my Fall Cleanup project would contain emails from the other Flowers researcher I had mentioned, it didn't. Apparently, I've forgotten just how many Flowers family genealogists were out there, eager to discuss their findings, back in 1999.

Before I could reach part of the alphabet—I had labeled the first folder "Flowers emails" and then added the last name of the person whose letters I had saved—there were two other folders with similar letter exchanges. One was devoted to notes with a man who was a prolific researcher on several family lines which crossed paths with my mother-in-law's lines, in which we had gone back and forth on a number of other surnames besides Flowers. The other folder contained emails which were an outgrowth of the earlier one, in which one by one, we Flowers researchers from Perry County, Ohio, found each other online.

Eventually, those emails became group emails, and before long, there were four of us sharing notes in this collaborative effort. Even after all these years—and despite my regular travels to Ohio—I have never met any of these researchers face to face (although I am now Facebook friends with one of them). Each of us had spent our fair share of time crawling around very old records from the region, and we enjoyed figuring out where our mutual connections were.

Even so, in short order, I was able to clean those files out completely. While reviewing the notes brought back fond memories, I know those lines so well now that I am certain the facts we covered then are now all documented and included in my online database. The only part I'm now holding on to are the several GEDCOMs each of us sent to the others. Basically, I've reduced all those letters down to about five or six reports. I'll likely spot check each of them against my database, then toss them, as well.

Recalling all those contacts met through the early years of online research makes me smile. Back then, genealogy was a team sport, not the game of solitaire it seems to have morphed into in our current situation. Still, family is family—and even now, there are opportunities to reach out and meet third or fourth cousins online. The "Make a Connection" link at Ancestry.com is just one of many ways to connect with other researchers who are also family members.

When I teach my beginning genealogy classes now, I use the examples of experiences such as these to try to encourage people to connect with fellow researchers. (And, of course, fervently hope the people they reach out to are as cordial in response as the ones I've met over the years.) Sometimes, these students take that advice to heart, and return to class full of excitement with encouraging stories of having met third cousins they never knew, who live close enough to visit. There is nothing as special as meeting family members you never knew you had—and then discovering they share that same love of family history. That's when a family search really becomes a family search.

Still, while it was nice to recall that golden era of the early years of online research efforts today, it certainly felt good to rid myself of so much paper. Bit by bit, every piece of paper shed from those bulging file folders adds up to more space in that file cabinet for new projects. 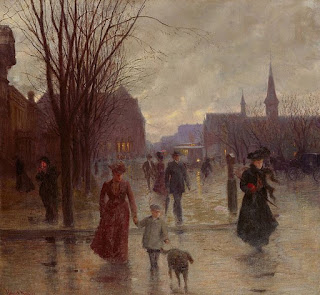 Above: "Rainy Evening on Hennepin Avenue," oil on canvas, circa 1902, by German-born artist Robert Koehler; courtesy Wikipedia; in the public domain.