It may come as no surprise to you to learn that, back in the days when people actually hung paper calendars on the office wall, the calendars I tended to purchase for such use featured reprints of paintings by famous artists. By year's end, I couldn't bear to toss such treasures, so I concocted a promise to myself: cut out the pictures and frame them. They would make a classy addition to my office walls. No one would judge me for not displaying the originals; it would be no big deal to think I had merely clipped them from last year's calendar. Besides, I wanted my money's worth.

On December 31, I would take down the Monet calendar from the old year and replace it with one by another Impressionist artist. The old one got chucked in—yes, you guessed it—the bottom drawer of my file cabinet. Along with the recycled manila envelopes.

You probably also guessed that, even after all these years, I've yet to clip one picture and get its framed self up on the wall. In any office I've had.

And now, it's my sad duty to grimace at the thought, but still go ahead and toss those beauties. After all, if you haven't used it in—what is it? six months?—then you need to toss it.

But wait! What about the warm-fuzzy advice? You know, if you hold it close and get a warm feeling, then it deserves the reprieve: keep it.

I did, unfortunately, have that warm feeling attack the minute I pulled those calendars out of the wreckage of my fourth file drawer. Doomed. Now what?

That's when I remembered re-gifting. If it works for college students just bestowed gift certificates for places where they'd never get caught dead, it could work for me, too. Handily, my daughter, now magically transformed from a college student to a teacher, has a great need for magazines her students can cut up and reconstitute in other guises. No sooner did I ask than I found a new home for my old treasures.

Of course, there was more to be found in that second half of the bottom drawer. Much of it deserved the boot, but some qualified for a second look. I found old newsletters for which I had served as editor, records from my own first "real" post-college job, correspondence regarding a statewide nonprofit organization's board of which I was a member. I even found a letter from a pen pal in Manitoba, addressed to me at my first college dorm.

It's memorabilia like that Manitoba letter which makes me stop in my tracks when the organizing urge strikes me to toss everything. I did that once, years ago in a fit of decluttering: tossed my collection of hundreds of postcards assembled over my high school years from pen pals around the world—who would ever use them again? Years later, it sickened me to realize my daughter would have thoroughly enjoyed seeing that collection.

Though a handful of calendars with Impressionist artists' best reprints hardly fills that bill, at least it reminds me there are other ways to declutter than to simply throw everything away. Even if the item is something I no longer need, if it becomes a welcome gift to someone else, it not only lightens my load, but brightens the outcome for others, as well. 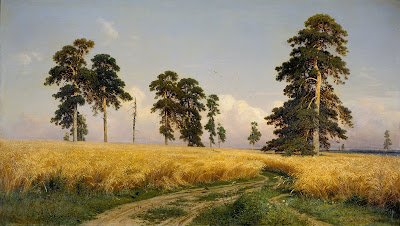