A “Who’s Who” of
Your Own Family History

Have you run into any famous names as you push your way into the unknown of your family’s past history?

I thought it rather notable when I bumped into a name of significance as I rolled through the genealogy of my extended Taliaferro line: Frank Lebby Stanton, writer and creator of the poem from which the Association of Graveyard Rabbits has drawn its name.

Finding mention of that name reminded me of the Unit Studies approach of my homeschooling years: a technique for studying a central figure or topic in history, then exploring all the related trails branching from that one point of examination. Sort of like mind-mapping for curriculum design, developing Unit Studies could escort you through varied educational terrain—math, science, composition, geography, language, sometimes even performing arts or athletics—all while studying history. Unit Studies took learning out of the education box and turned it into an observatory of how life really is, where everything is (or can be) related.

That experience—finding Frank—got me to thinking: could there be others who were once recognized as significant by their peers, during their lifetime?

Of course, that thought led to another: would there be enough of those interesting people in my extended family universe to warrant creation of my own family’s Who’s Who of relatives?

While I thought this an interesting possibility, my inner critic decided finding Frank was definitely a fluke—besides, he was an in-law—and dismissed the idea.

Then I ran into yesterday’s story.

There I was, mindlessly grinding my way through the Taliaferro genealogy I’ve been studying for the past month—Willie Catherine Ivey’s Ancestry and Posterity of Dr. John Taliaferro and Mary (Hardin) Taliaferro—and I saw the possibility for entry number two in my own family's Who’s Who.

By this point in my progress, I was up to page fifty six in the Ivey text, and working on the descendants of Dr. John’s son Charles. I had moved on to Charles’ son—named John, after his grandfather—who married Martha Wright and moved from the family’s hometown in Surry County, North Carolina, to Tennessee.

This younger John Taliaferro had a son whom he named William, who had been married twice, owing to the death of his first wife sometime before 1869. William and his second wife—a cousin named Martha Franklin whom everyone called (for some inexplicable reason) Pattie—had one child, born in 1870. They named this son Charles Franklin Taliaferro.

While this younger Charles Taliaferro was listed as “a prominent physician,” that is not why I bring up his story today. Since Charles and his wife had no children, I’m certainly not mentioning his story for that reason—he, too, joined the ranks of those who became the last leaf on their family tree’s branch.

It is solely for one sentence in the Ivey book that I bring up Charles’ record today. He married a woman whose own genealogy was notable enough to be included in the Ivey narrative.

Up to this point, nothing in the narrative would be unusual for a genealogy book. It is the continuation of that last sentence that made all the difference.

…and granddaughter of Chang Bunker, one of the Siamese twins.

Siamese twins? I thought the name, Chang, to be quite unusual for the spouse of anyone associated with a family whose roots reached back to colonial days in America. More than that, though, while I understood the concept of Siamese twins, I had never given any thought to the reason why such twins might be dubbed “Siamese.”

Straight to Wikipedia I flew, looking for any possible entry on Chang Bunker.

Yes, the original Siamese twins were indeed named Chang and Eng, and they were, literally, Siamese. Born in 1811 near Bangkok, they were observed as teenagers by a Scottish merchant living in the area. The merchant realized the financial possibilities in exploiting the curiosity of the twins’ predicament, and entered into a contract with the twins’ family to take the boys on a world tour.

At the end of their agreed contractual terms, the now-world-traveler twins decided that the place where they would most like to settle was an area near Wilkesboro, North Carolina. They adopted Western styles and ways, choosing even to assume an anglicized surname: Bunker. Becoming naturalized American citizens, they went into business for themselves and became an established part of their new community.

Chang and Adelaide became parents of eleven children. One of those children was Victoria Bunker, who eventually married Nathaniel Bolejack. They, in turn, became parents of Ida Virginia Bolejack. And she, as we read above, became the wife of Dr. Charles Franklin Taliaferro.

While Chang and his constant-companion brother Eng became worldwide curiosities, Chang’s granddaughter became someone in my own extended family whom I can consider intriguing. If it hadn’t been for stumbling upon her name—and the inclusion of her family’s story in my family’s genealogy—I wouldn’t have revisited the history of the concept of “Siamese twins” and would have missed the personal connection totally. Though yet another in-law to my Taliaferro line, Ida Virginia Bolejack Taliaferro makes a great candidate for my own private Who’s Who of interesting relatives. 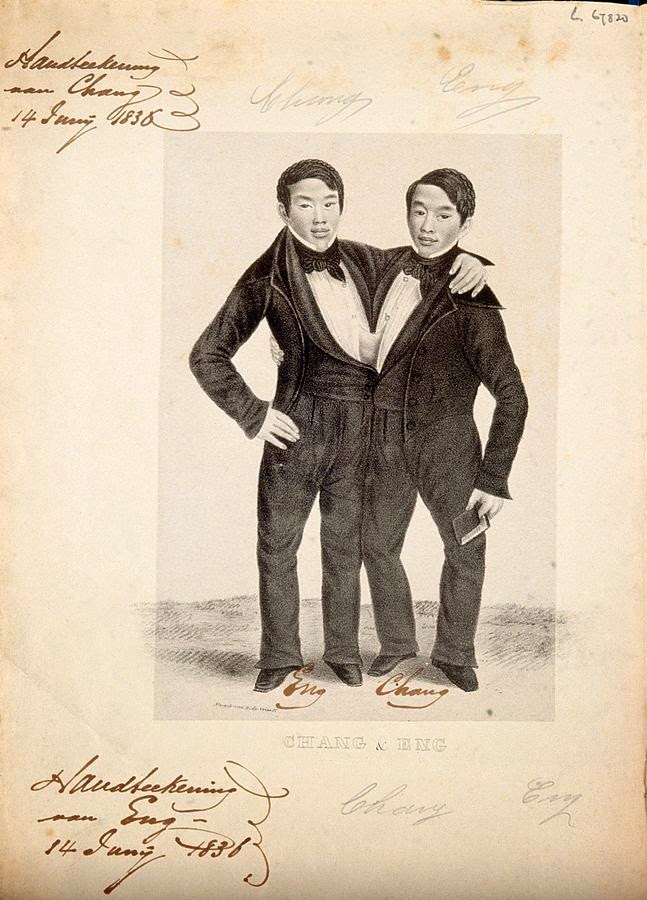 Above: "Chang and Eng, the Siamese twins, One Holding a Book," undated lithograph by unidentified publisher; public domain image in the Iconographic Collections at Wellcome Library, from Wellcome Images, a website operated by Wellcome Trust, a global charitable foundation based in the United Kingdom; this image shared under Creative Commons Attribution only license CC BY 4.0; via Wikipedia.
© Copyright 2011 – 2022 by Jacqi Stevens at 2:43:00 AM
Email ThisBlogThis!Share to TwitterShare to FacebookShare to Pinterest
Labels: Medical Issues, Taliaferro